Ever feel wanting to join BB even you are 16 years old?

Is that a guard? Is that a pilot? No! They are Primers! Most companies in Malaysia don't offer this section but they do exist.SO what are Primers and what they do in Boys' Brigade? This section provides a chance for the late teens to experience BB and for those who have graduated from Senior Section to continue to experience BB in their college years. The age range in this section is between 16 years old to 21 years old.

Initially, before this section is introduced, the senior programme has very vast age range which is 12 years old to 18 years old. Correspondingly, many members who age around 16 and above tend to lose their interest and leave. In contrast, a member who is a much younger age was successful under the senior programme. Thus, between 1979 to early 90s, BB in Singapore tried many attempts to make sure that older boys still keen on staying. Many were fail. Finally, one programme that is introduce became the limelight which no other than the Primer section.

Few years after that, The Boys' Brigade Malaysia decided to adopt the idea due to the “pyramid effect” of ranking structure in BB which cause high dropout in the senior section. Therefore, the proposal was presented and accepted for a trial in 1995 at the 31st National Council Meeting in Kota Kinabalu, Sabah. 2 companies were chosen, namely 3rd Kuala Lumpur and 3rd Kota Kinabalu to experiment with the idea. After 4 years of trial, the Primer Section was formally accepted at the 35th National Council Meeting in Kota Kinabalu, Sabah in 1999.

These are the 4 elements in Primer Section Core Programme:

SO the question is how do they usually operate?

Primers can also gather just like a casual club in colleges and universities. Moreover, tertiary studies have flexible timing, primers can allocate their own meeting whenever they are available. Usually, meetings can be held in a school auditorium, a church hall or a lecture room. A company can decide the duration of the meet which can be range between 2 to 5 hours.

With the discretion of officer-in-charge, Primers can be divided by squads and they can elect their own squad leaders. This can promote the “esprit de corps”. Whenever there is a combined parade, primers are equal to NCO unless in some cases some primers are to be promoted to warrant officer for a specific leadership and instructional roles. Most of them are placed to serve under Junior or Senior section to test their leadership skills. They may also work in BBM HQ. Primers will be trained in all aspects of Brigade work and will undergo the Brigade's standard officer training course(BOTC).

Just like seniors, Primers have their own awards system but very less. They only have 2 awards which are membership recognition award and the Robert Davis awards. A Primer is only allowed to wear one badge which is the highest gain in the senior's section. That award can be either president badge or founder badge(worn over the left arm). If the primer has founder badge and the Robert Davis award, they are allowed to wear both at the left arm.

This award allows the new primer to express themselves and be active in the Boys' Brigade and to be able to understand the fundamental of Boys Brigade. This award may be worn slightly above the left breast pocket, above the nametag during uniform attire.

Among the requirement are:

b) Attend a minimum of three Company Meetings.

c) Take part at least one overnight adventure activity with other Primers, which

is organised by the Primers' Section.

e) Comprehend the purpose and aims of the Primers' Programme. 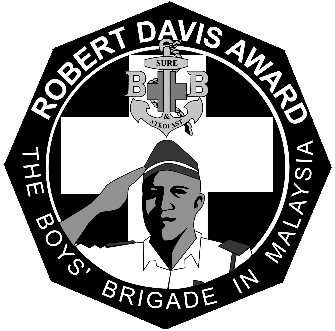 So how does one obtain this?

This award consisted of 4 elements and must be completed satisfactorily and will be awarded a certificate for each element that accomplishes. The Primer also needs to attend a completion course with a good measure of performance in the course.

Among the requirement are:

nature but which depart from the specified conditions. Permission can only is obtained from the National Executive or The District Executive.

In conclusion, Primer still offers great opportunity and chance to all members at young adulthood age. Currently, Membership for Primers is decreasing throughout the recent year and only some companies offer this section, Namely,1st and 2nd Manjung,21st Penang and 1st Kajang company.

If you are interested to Start a Primer Section in your University or College, please refer to your companies or email us at  [email protected] and we will teach you how to start one!